Reporting In – Updates from Across the World from our Men 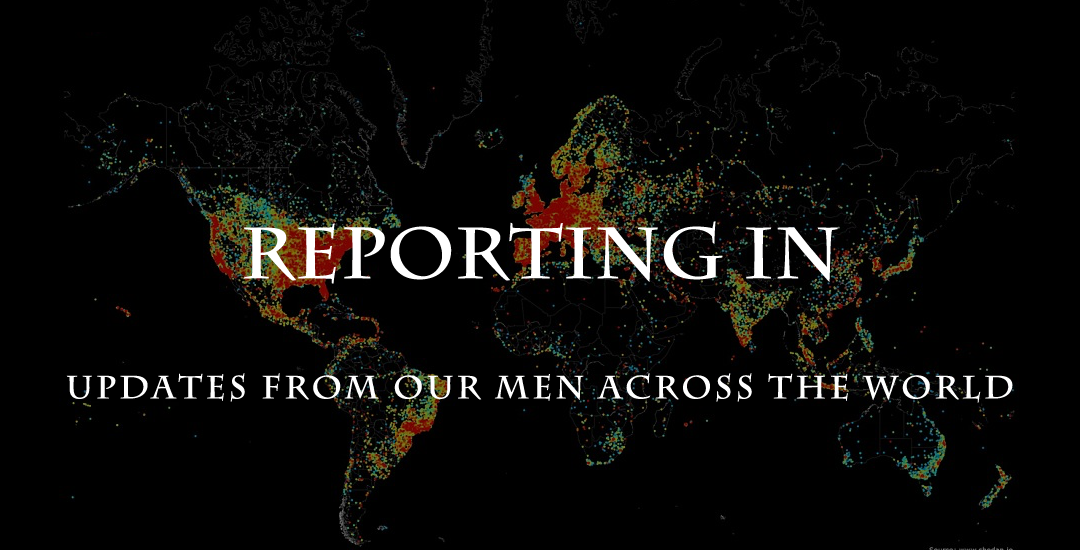 Not news to anyone, our nation and world is in various levels of crisis in addressing the Coronavirus “pandemic.” We wanted to hear from our men in various parts of the globe. Though it’s always possible to stay connected, now may be a vital time to do so.

San Diego – Sandy Peisner – Due to city and county officials acting quickly (other than by the international border), San Diego has low amounts of the virus. On a personal level, feeling frustrated, depressed, sadness, feel a lack of control, loss of freedom, helpless In some odd purgatory state.

San Diego – Chris Christopher – Men seem to be adapting to this strange new world. Hope drives us to think we can restore some kind of life outside our homes. Love keeps us inside protecting the ones we love and the people we don’t know we love yet.

Saigon – Dan Kempner – All is well here. Vietnam has handled this better than most – no new infections in the past three weeks, schools begin to open on Monday – though my kids aren’t scheduled to go back until June 1 – they’ve been out of school since January. Lockdown is largely over. Under 300 cases total here. I haven’t lost anyone that I care about, though I know people who have.

Las Vegas, Nevada – SR – How is Las Vegas? Las Vegas is crushed. As of Today we are at 412,000 claims for unemployment, highest in state history. The Strip looks like the Zombie Apocalypse happened, the bodies were removed, streets cleaned and there are no human beings left alive to walk the streets.

Bobcaygeon, Canada – Steve Junkin – My hometown was hit hard. 100 miles north of Toronto, a snowbird retirement town, 34 of 66 people died. A nursing home my grandmother was in years ago, Pinecrest, got infected by people returning home from Florida to visit loved ones. I have an uncle in there still. He’s all right. Here in Oakville it’s around but people are generally complying.

Framingham, MA – Tim Spellman – This is one of the worst hit cities in Massachusettes, which, in turn, is worse off than most states. Things contributing are (1) the Biogen conference in March, (2) the worst prison outbreak in the state, and (3) a high concentration of affected nursing homes. Stay safe, everyone.

Washington State – Rick O’Keeffe – Here in Washington, things are mostly quiet. The biggest population is Seattle and the counties directly north and south of it – 550 out of the 738 deaths in the state are in those three counties (155 more are in the next most populous five). Where I live – 1 death and 101 cases.

Washington County, Oregon – Kent Holman – Currently in Oregon we have 459 confirmed Covid -19 cases and 10 deaths from it. We continue to shelter in place and for the most part people are social distancing and abiding by good hygiene practices. However like everyone we are all concerned about the economy and small businesses as well as the health and welfare of everyone.

Calgary, Alberta – Gary Wojciechowski – City is so quiet now as so much is closed. Weather getting nice finally and a lot of us are out of work. Our oil sector is hit hard with the drop in oil prices, on top of everything else and many laid off. Many businesses will not survive the fallout. Many are also able to work from home. Cases we’re told are still increasing in our area. We have more testing being done here than in some other parts as well. Our former “Head Smashed In” DC, Jason Macleod is an RN now living in Vancouver Island BC Canada and he created this video: https://www.facebook.com/HeadSmashedInDivi sion/videos/633155857537740

Jersey City, NJ – Dave Rudbarg – Jersey City is pretty quiet. I only leave the house to go food shopping. I have a great roommate and she has a lovable Chocolate lab. I feel good.

Northern California – Scott Baldwin – I live in the sticks a hundred miles North of San Francisco. Only four cases in all of Lake County. Not much impact around here.

New York, New York, – Geoff Kole – Yes I’m being careful but I’m not about to roll over and die like a dog. I’m a first responder working with Children of Emergency responders in a school setting. We wear masks and tested every day. Get busy living or get busy dyin. Be safe, keep the elderly and ill quarantined and live your life.

Vancouver, Canada – Brad Leslie – Downtown Vancouver by the Seaside on the Left Coast of Oh Canada in the Great White North we’re doing fine. 10% of traffic, people and businesses out there lots of protocols, a few unthinking folks getting too close. A few folks are planning an anti-lockdown demo parade tomorrow. I’m out n about, in a boot, cos I’m speshull, er, essential. it’s almost post apocalyptic, lots of zooms. I’m doing great, it’s a nice holiday.

Derry, NH – Joe Kopp – Family is fine. Working at a grocery store so have full hours and they are giving us $2 per hour as incentive. Nah … as a whole doing alright but there are enclosed places like an Easter Seals school that has a lot of cases relative to the rest of the state. I hear prisons are having the same problem.

Atlanta, GA – Brian Childers – Pretty well, no panic – yet. Lockdown? Until TODAY, was under shelter in place order. Today governor allowed bowling alleys, hair and nail salons, massage parlors, tattoo parlors to open under “guidelines.” Theaters and restaurants Monday. We’ve been the laughing stock of the nations, Newsweek, etc. Fauci said too early, etc. All of the mayors of the largest cities were against it and actively spoke out against it and advised citizens to stay in place – too soon. Traffic down. Way down. How are the people? Seemingly OK.

San Jose, CA – Tom McCarter – Here in San Jose, our county has the highest group of infections in the state. We are sheltered in place and barely venturing out. The team and The OCB division meet on Zoom. We have cut our QuaranTeam Zoom meets down to Monday mornings and Thursday evening. The SJ police announced they are cracking down on people not staying home.