I awake with that languid sense of not knowing where I am, hearing laughter, sounds I don’t recognize, can’t identify. The sea? Fire crackling? Dog yapping?

I bestir myself and, unzipping the tent flap, emerge and do a quick survey. Karen and Janie asleep. No Dave. No kids, but they’re off playing somewhere, no doubt, since the representation of the younger set is higher than at any such event in our collective recent memory and there are plenty of playmates.

Must be because it’s the 20th anniversary of the first Maine Adoption Placement Service (MAPS) Labor Day, adoptive family rustic camp out here at Kelly’s Point, in the year 1998.

Evidence of the celebration is everywhere, from the handwritten posters on the back of station wagons and minivans announcing the family’s names and number of annual camp outs, to the calendar of events near the Palaver House, indicating more programming than we’ve seen before.

We always have lots of empty, sleepy time on Sunday afternoon, which it now is, after taking a few hours, or a day, to find the rhythm of the weekend. Each year has its own character. I sit down in one of the camp chairs and observe the congeries around me. The evidences of rustic, camp life by the Atlantic Ocean, with four adults, five children, and two dogs. Mini-frisbee, upside down on the grass in the center of the circle of chairs, filled with empty peanut shells, open bag lying on its side nearby; bikes left in a jumble on their sides; sweater, now not needed, draped over a chair. On the picnic table I see assorted rocks and seashells, mustard squeeze bottle, hand mitts, overturned dishes long since dried from morning washing, paper plates, blown out of their wrap by the freshening wind, now picking up out of the southeast, over the Beal’s Island Bridge and sweeping the fog into Kelly’s Point. 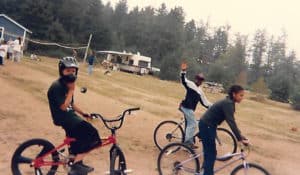 I hear “Five o’clock,” in answer to a distant query and I realize I have no clue. Time has stood still. My inventory continues. The remains of a camp bowl of ramen noodle soup, chip bags folded over on themselves, open corn chip bag propped on a Beanie Baby Bear, unlit Coleman lantern, spoon with a rim of goopy lunch mayo, empty deli meat cellophane wrap.

There’s my daughter Anna’s Braid Sheen hair spray, the use and aroma of which, in combination with her nighttime granny hat, has earned her the nickname “Grananna Grape.” There are cocoa mix envelopes on their sides, half in the box, wads of paper towels, for this use or that, cameras, both disposable and not, bike helmets, Skin-So-Soft (our bug repellent for this trip), salsa jar now broached, coffee filters, plastic drink cups, shoes unpaired, empty dog bowls, Igloo coolers, crumbs, half-eaten cookies, citronella candles. Just a chaotic warm, family jumble of stuff, unattended, left where they were last used. No “shoulds” here really at all, except as the well-worn signs around the point admonish, “Please don’t spoil our children’s fun.”

I remember waking up on that camp out thinking about how to tell the story. It is such a familiar one, comfortable, like a pair of old slippers. My thoughts ran this way. I remember John McPhee’s method of putting together an essay, which made me think of A Sense of Where You Are, his profile of Bill Bradley as a college star at Princeton. I thought of a teammate’s quote of Bradley that basketball is only one millionth of what he has to offer. Then, inexplicably, I realized that if Bradley should win the presidency there would be two presidents in a row named Bill. And then I thought of who was the fourth president? Could I name the first 10? The 16th is a gimme (Lincoln) and, though I still know this silly little mnemonic for remembering the sequences of Tyler, Polk, Taylor (think “Tyler poked Taylor”) and Fillmore, Pierce, Buchanan (“Fillmore pierced Buchanan” as in with a bayonet), I’m at a loss to know which numbers they were. Wondering what kind of ungrateful forgetful patriot I am, the kids have suddenly shown up, disturbing my historical reverie, saddled up on their bikes messily and noisily and departed again, with big brother Evan keeping a watchful eye.

Dave, he reports, is down on the rocks with Deelee. He also tells me I have gotten quite burned, while he vociferously complains about his own burn, his first in a long time. My guess is that the second Polar Bear Dip is now out the window, but after all, we came, we saw, we dipped already.

A northwesterly gust kites a paper plate off the table. Jane continues to sleep with the dogs in their camper. Karen doesn’t stir. We have heard an estimate of 212 attendees this year. Not sure where that ranks in all these 20 years, but it feels rich and full. I have just returned from a crab apple sojourn, with a bag of maybe fifty of the fruit, picked from a tree on the Florida neighbor’s property. There is a new structure there, still unfinished, on what used to be the setting for the “witch house,” an old beat-up shack weathered by the years, unloved, and the source of some good ghost stories in past years.

I have gone in search of new crab apple sources because our old standby trees, our outdoor sporting goods store, which supplied us with all the” balls” we needed for our annual Home Run Derby, are bereft. Dry summer, all over New England, has made apples of all types smaller and sweeter (not that sweetness is characteristic of crab apples), and apparently, is not good for these little ersatz baseballs either. We found one tree yesterday, with a fair amount, but the product was inferior, usually smashing into bits before even hitting the water. I suspect these, though red in color and the right size, will not fare any better. But they will give us something to swing at, with the new, freshly duct taped whiffle ball bat that now must accompany any well-prepared trip up here.

The two women have waked and Anna has checked in with a cheery “Hey, pappy. When are we leaving in the morning? Mad early?” We discuss the relative merits of leaving early enough to beat the crowds at the Riverside Cafe, our annual breakfast stop in Ellsworth on Monday, en route back to Portland. and to the Thibodeaus’ in decent season to divvy up the food between the two families, separate the equipment, and get us on the road back to Boston without getting totally, depressingly stuck in traffic. Then Anna’s off again.

This is the heart and soul of what this weekend is about for all of us. We have, to one degree or another, blended families intentionally, and this weekend is a celebration of family, an annual pilgrimage to the Maine Coast causing an automatic blocking out on our calendars of the days around the final weekend of the summer season. It’s dependable, like some old favorite uncle’s house or your parents’ phone number. On Labor Day weekend you start driving north and there will be a place for you at Kelly’s Point. No need to call first. Just show up. In fact it has become a checkpoint, personally for this writer, more important than New Years or a birthday or Christmas. I will ask what do I want to have done by next year, when we drive to Jonesport? 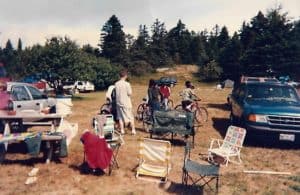 As I scroll back through the weekend, and my little notebook aide-memoire, I see bullet points of memories, like this one of the campfire, as real as the sea glass from another year that sits on our table top at home. What else, what other memories, will add color, at least metaphorically to our lives this year? I’m inventorying this year’s takeaways as we sit by the fire at, of all things, an old-fashioned family sing-along, with a song book also compiled for the 20th. There are camp and nonsense songs like Duke of York, On Top of Spaghetti, Mom, Wash My Underwear (to the tune of God Bless America), White Coral Bells (which we actually did in a nice if inevitable round), and You Can’t Get to Heaven to name just a few. Evan, plying his natural clown trade is gradually becoming a center of attention, with his light up the room personality, and people laugh. We are eating s’mores, sharing the gooey marshmallow sticks and clapping. We have never done this in the 13 years we have been here. And it works. We are awarded our ribbon for the most camp outs by one family.

For some reason my final enduring memories are of the wet fog which rolled in Saturday night, the tell-tale signs of which were in evidence Sunday morning. While I was observing the puddles and streaks on anything left out all night, The sodden paper bags, the glistening tents, and the damp grass, a line from The Sound of Music (“My Favorite Things”) came to mind unbidden. (raindrops on roses and brown paper packages tied up with string) and I thought about how all year these memories are a few of my favorite things, part of my inner life. It hard to forget how much fun these smelly one-holer latrines are, the wet mornings, the hungry bugs, but they are also part of what draws us all back year after year to this place. There’s a comforting ritual about it, even a sacredness, that we can’t imagine life without.

We missed Kyle this year, the first of the children to miss a camp out. But inevitably, as growing up, and life, make more demands, not the last one. Like the ocean itself, now gently lapping at the rocks below our site, it’s an experience which can be dipped into again and again, revisited and reclaimed as one’s own. Last year’s ocean is not this year’s, just as last year’s family is different than the one here, now.

I wonder what family will be here next year.