What Is A Legacy?

Back in the day I used to travel all over for my job (consulting), and one of the really great privileges of that job was a two-week gig in Johannesburg, South Africa. But this one was so “out there” that I decided to bite the bullet and bring my family over for a vacation at the end. So my wife, my then 16-year-old daughter and my 71-year-old mom arrived that Friday in 1996, and we packed up the rental car (a Toyota Corolla) to head east to Kruger National Park and Djuma Game Preserve.

As they say, getting there is half the fun!

The first several hours of the drive (British side) were uneventful, but as we got closer to Kruger the paved road became gravel, which became dirt/sand, and eventually two sandy ruts through the grass. At times I had to drive up on the edge of the gra 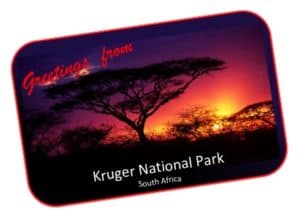 ss because the ruts were so deep. Native kids watched from their nearby yards wondering what these four white people were doing out here on this path. That soon came to a screeching halt when we saw what was next – a ravine with a 60% pitch down 20 feet to a river bed and then straight back up to where the “road” continued. Both banks were just loose sand. I said, “Hang on guys, we’re gonna do a Dukes of Hazard, and if we don’t make it up the other side, everybody is getting out to push!”

The local kids, apparently knowing what was ahead, had run along side to watch and cheer for the event. And so with a very sandy rooster tail we made it down and all the way back to the top of the other side – and about 20 more yards further until the little Corolla was bellied up in the sand. Stuck in the middle of nowhere. But luck and good fortune was with us as about 30 minutes later the Range Rover from Djuma came looking for us and towed us into camp.

After three privileged and beautiful days at Djuma, rife with game watches and star gazing, we headed back via a different route, southward through Kruger to an overnight stay in some tree houses in the park. Sarah and I were in one and my daughter and mother in the other. As the sunset colored everything red-orange, we hear rather feebly from the other tree house, “Daaaaad, you might want to check your sheets. We found a big spider in ours!”

Such is the stuff of memories. It was a watchful night, to say the least.

The reason I wanted to tell this story is that my mom passed away just before her 92nd birthday this past spring, and, as was her wish, we had a memorial service to honor her long and beautiful life. My daughter (now a doctor and mother of two boys) went up to the podium to honor her Grammy. And she pulled out my mom’s journal (something mom had sent her when we moved her into assisted living) and read the full account from a South African trip in 1996.

Legacy is all about making memories, yes, but just as much about keeping them alive.

Kris Girrell is an international executive leadership coach and consultant. He is author of Leadership Gold (coming in June 2018), Wrestling the Angel and co-author of A Married Man’s Survival Guide.