My purpose is Healing The World Through Music.

Last summer I connected with a man I had been watching on Facebook for two years, G. Edwin Bryant, Sr. (No relation.) He’s built four schools in Liberia since 2002, has about 600 students, and helps hundreds of orphans by waiving tuition and placing them with families. I watched him build a school, brick by brick. I watched him create a community farm after the Ebola crisis. He now manages 1,000 acres and 4,000 farmers. His drive, focus, and faith is inspiring. I wanted to get involved. It was part of my purpose.

We got on the phone last summer and he told me, “For the first time ever, our schools will be offering piano and voice lessons, and we will have all-school public children’s gospel concerts twice a year.”

I was instantly drawn to this good work. Edwin gave me video chat tours of the classrooms and interviews with the teachers, and I was able to speak a few words of encouragement directly to the children. I began to help by purchasing a few keyboards for the schools. (By the way, he has been 100 percent accountable for the funds.) I built a school website for him at http://BryantSchoolSystem.com and began to raise funds for the first public concert at http://LiberianChildrensChoir.com. The first public children’s concert in the history of the country of Liberia took place this year in February!

My fundraising paid for the concert hall of $400. Though I was short about $1,500 total, Edwin was able to round most of that up. The concert ticket revenue is being set aside for the purchase of a school bus, as many children travel long routes on dangerous roads to get to and from school.

I never thought I would be connected to another man on the continent of Africa, let alone also by the last name of Bryant, nor begin to have relationships with these hundreds of beautiful children by whom I am now affectionately called “Uncle.” What Edwin  gets from this is support in the form of attention and help from the outside when he has gone it largely on his own for the past 15 years. What I get is a deep feeling of fulfillment in living my purpose, in changing the world through one child, and one man at a time. 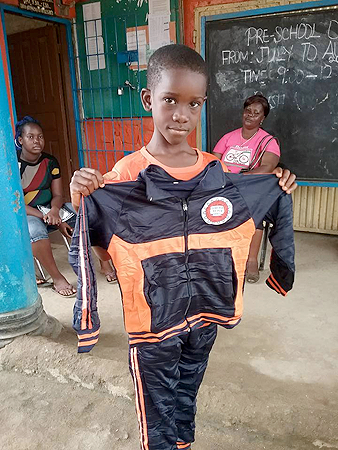 I’m responding to a call much bigger than me to establish a legacy to help these children that hopefully outlasts my years on this planet. The next target is $10,000 to equip each of the four schools with 10 keyboards, two bass guitars, two electric guitars, two acoustic guitars, and a few sets of hand drums. I also personally need funding of $3,000 to create and establish a public nonprofit charity so that gifts will be tax deductible and therefore hopefully increase. I’m able to provide full accountability on the use of all funds as not a penny goes into my pocket or Edwin’s.

I encourage any man to listen to that small voice prompting you to get involved, and ignore all the monkey-brain chatter that floods immediately in to steal your possibility and your legacy. Take a chance on someone. Take a chance on yourself. You are truly capable beyond your wildest imagination. Step into it.

1 thought on “Healing the World through Music”