Ask For What You Need 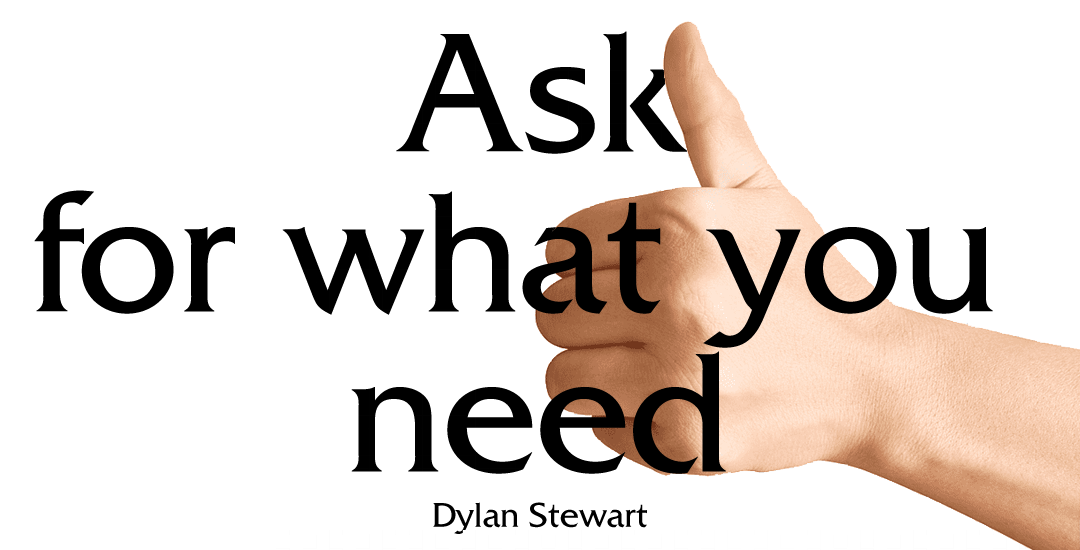 When I first found my way into men’s work I was a proud man. I was a single father. I was running a successful business. I didn’t know much, but I knew that I could handle whatever the world could throw at me.

I had survived the suicide of my daughter’s mother; I had sold a TV pilot; I had worked my business back from the brink of bankruptcy, and I had finished my college degree against all odds.

Or so I thought…

Stepping into men’s work and stepping onto a team filled with inexperienced, untested men I felt certain that I didn’t need anyone’s help for anything. I wasn’t on a men’s team to get help, I was there to be of service, to help and uplift others, to make a difference in men’s life … but what actually happened is another story entirely.

Growing up I had learned to handle myself, manage my own emotions, solve my own issues and take complete care of myself. Or so I thought.

A men’s team is a unique space to learn your place among men, to learn who you really are, to discover your biggest barriers and gain the tools and the support to dissolve them. But there’s just no way to do that alone.

As soon as my team formed, and I found myself surrounded by other men, I realized just how wrong I had always been. But it took a great humbling before I would really take that lesson in.

At first I acted like the big man on campus, like I had my issues all handled, like I was above everyone else. But it didn’t take long before I came crashing face first into my ego, into my barriers and into my desperate need for help and support.

One day as I was shopping for parts at a local electronic shop, high on my own success, convinced of my own invulnerability and oblivious to the fate ahead of me, I fell and I fell hard … and not in some metaphorical way.

Pushing a shopping cart filled with equipment down a parking lot, I made a dreadful mistake. Thinking I was still 12 or something I gave the cart a strong push, and as it rolled down the blacktop picking up speed I hopped on the cart for a little ride. But the cart was heavier than I realized, and I was a lot bigger than I was the last time I rode a shopping cart through the grocery aisles. I lost balance and the cart toppled, dragging me with it across the asphalt.

My right hand got pinned under the cart and shredded along the rough surface, and pain shot through my whole body.

When the cart finally stopped, I was able to get to my feet. My hand was a mangled bloody mess.

Being a do it alone mofo I fought back the pain, wrapped my jacket around my damaged hand and somehow got the equipment into my trunk.

Looking at my watch I realized it was later than I thought, and my daughter was about to get out of school. Fighting back the searing, burning pain in my hand I climbed behind the wheel and tried to shift my manual transmission into reverse to hopefully get on the road and get to my daughter’s school.

In that moment I didn’t need anyone. I had it all under control. There was no challenge I couldn’t face and conquer alone…

But when I went to shift from reverse to first gear my hand flared up, the adrenaline died down and I knew I was out of my league.

Seconds stretched into eternity as I turned all the problems over in my head, looking desperately for a way to solve it all. I felt a little woozy from blood loss, the clock was ticking, and there was no way I was going to get out of this without some help.

In that moment I flashed on my team. Those men, eager to help me, eager to support me. I thought about my parents and all the ways they had supported me from the sidelines, letting me think I was doing it alone, and I thought of my friends who I had helped time after time, but refused to let them return the favor.

I needed all of them.

The first call was to my mom, and as I described the situation I could hear the fear and panic in her voice. She wanted to save me, but what I really needed was for her to pick up my daughter. So I asked her for help, told her what I needed, and she rushed off to get my daughter.

The second call was to one of my best friends. I knew I was losing blood and needed to get help immediately, but there was no way for someone to get to me. I asked him to find the closest hospital and stay on the phone to guide me there. He gratefully obliged, acting like my own personal GPS system. I fought through the pain and somehow managed to get to the hospital with his help.

My mom and daughter met me at the hospital, and I squeezed my mom’s hand tightly with my left hand while the doctors picked glass and chunks of asphalt out of my right hand. I felt helpless, but somehow I felt safe and taken care of. It was an amazing feeling to know that I didn’t need to do it all, even just for that moment.

I was fortunate, I had ripped some tendons but nothing permanently debilitating. The doctor bandaged me up, and my mom brought me home while my friend arrived at the hospital to bring my car home for me.

But I wasn’t done with asking for help. Not by a long shot.

A few days later I had surgery on my hand to repair the ripped tendon and get stitched up, and I returned from the operation with a cast up to my elbow and a boat load of pain killers. I was truly helpless.

My mom watched my daughter for the next few days while I recuperated and tried to get my life back together. I couldn’t work, I couldn’t go shopping, I couldn’t sleep, and I couldn’t even bathe myself.

Days went by and my men’s team called me regularly. They asked if I needed anything, and somehow still full of my ego, still struggling to uphold my image as a powerful man, I refused again and again. Until I got to a point where I just needed to take a shower, clean my wound and myself up and try to get back to some sense of normalcy.

I remember the moment so well. I was in the bathroom, my pants around my ankles, and my sweatshirt pulled half over my head. I couldn’t manage to get it the rest of the way off.

Imagine the humiliation, the great and powerful Dylan Stewart taken down by his own clothing. I was humbled, and began to cry out of sheer exhaustion, out of pain, at the futility of my life, out of complete desperation.

And that was when the phone rang.

It was one of my teammates, and this time when he asked if there was anything I needed, I finally admitted my powerlessness. I cried and he listened. I raged and he held space. I moaned in pain and he asked me what I needed.

“I just need to take a shower,” I told him, “but I can’t even get undressed.”

I felt humiliated. What would he think of me. How would I ever look him in the eye again?

But without a pause or any snickering he simply told me he would be right there. And true to his word he showed up, helped release me from the tangled sweatshirt, pulled off my pants and underwear and turned the water on.

I thought back to all the times in my life I felt like I had done it alone, and I realized there had always been somebody there. My parents, my friends, my family.

I had never been alone.

I have been refusing my weakness, and thinking that made me a better man when owning my vulnerabilities was actually the strongest thing I could ever do as a man.

It’s a lesson that I’ve had to learn again and again in my life. Asking for what I needed. Letting people help me. Recognizing none of us can do it alone.

And then finally owning my any need for others, I had unlocked a piece of me that would pay dividends for decades to come.

I am not a self-made man. I am not a product of doing it myself. My successes are not mine alone, but they belong to every person whoever reached out their hand to help, to pick me up, to push me forward and carry me onward.