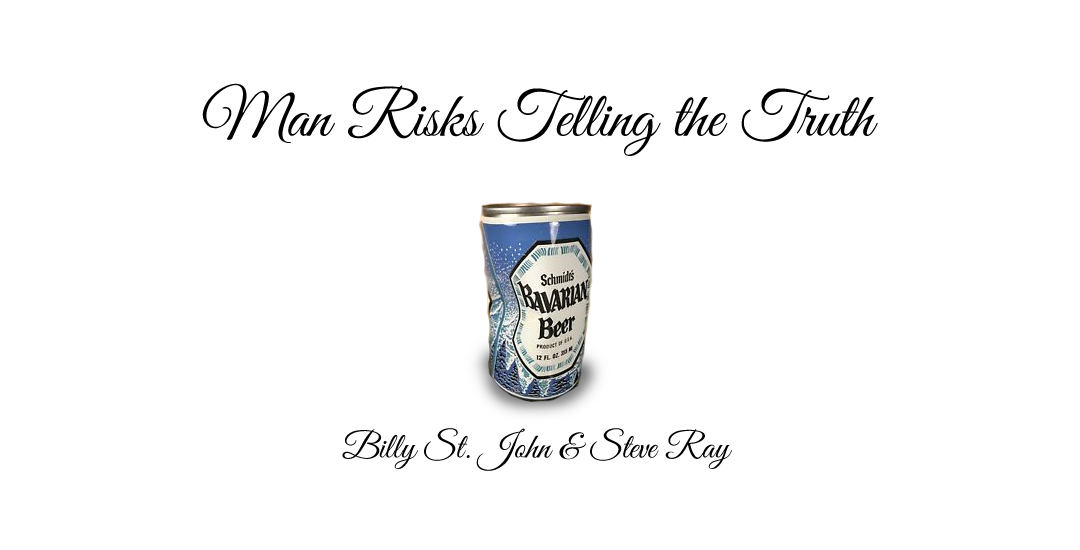 There was a man who would sparked a new life for me, because he dared to call me out on my lies.

I haven’t checked to see if he wanted me to use his real name … so to stay in honor with him, I’ll just make up any old name. We’ll call him “Steve Ray.” (Mr. “Ray” responds below.)

Anyway, Steve Ray called me one Friday night to talk and realized that I had been drinking. I had told my team long ago that I was an alcoholic and had been sober for around 16 months back then. I mumbled some lame excuse that it wasn’t a problem anymore. He said OK and hung up.

Minutes later I heard from another man on the team. He said “RayGun” had told him that I was drinking again. I offered another lame excuse. We hung up.

And I continued drinking.

At my next Monday night team meeting, I was surrounded by all the men and was inspected for about 30 minutes, until I quit lying to them and told the truth. I had just finished acting in my first movie. It had been my deepest dream, to be a film actor, since very early childhood. And I had panicked. Numbing fear had set in, and I was drinking to mask those fears.

My teammates all joined my crying and wailing until I wasn’t paralyzed any longer.  I could breathe again. So, I promised that team that I would attend at least four AA meeting a week. Now, for over 22 years, I’ve never broken that promise. I also never renegotiated that promise with the men of that team, so I still do those four meetings and hope to inspire others.

Live a life that matters!

Can you image how powerful that is: to keep your word that long … because of one man, “RayGun,” who responded when he heard a red flag in my voice?

Or, are you willing to have the men who love you, shine a spotlight in your eyes if you are out in the weeds? Will you be willing to act on a red flag and offer help?

If you said NO, then I call LIAR on you. You DO have that power. And you are learning to access it fully, because of men who’ve stepped up for you.

For me, that man was Steve “RayGun” Ray.

From what I can remember, I got pissed one night when I called Billy to check in. I believe in him SO much that when I called him out on his drinking I thought he needed a dose of what we call “ruthless compassion” … so I gave it to him from a place of care and truth.

If I had any concerns, it wasn’t about losing a teammate or friend; it was that he was not going to take in what I was offering to him.

The big win I received was to see Billy happier and healthier, and in a feature-length motion picture called Mr. Deeds, accomplishing one of his life goals as an actor.

For me, I don’t think calling men out really “impacts” the “relationship.” We men are all just a bunch of imperfect fucking jerks caring about one another. Sometimes great shit happens and sometimes shit hits the fan.

It’s about the path moving forward and the lessons we learn.