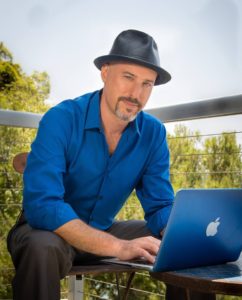 At 45 years old, I’ve been a father for more than half of my life. My first child, my daughter Phoebe, was born in 1995 when I was just turning 22. I raised her as a single dad, from when she was six months old. My relationship with her was tight, and although I wasn’t the perfect father (who is?) I did my best, and I think I did a pretty good job.

When I was 35, my second child, my son Christian, was born. My relationship with his mother was challenging almost from the very beginning. We had different beliefs, different ideologies, different ways of thinking. But I put my all into it and into making the relationship work … because I thought that was what was best for my son.

Along the way, that challenging relationship forced me to make an almost impossible decision to help my daughter move out of my house and move in with her aunt and uncle while I sorted out the relationship. It was a difficult decision, a Sophie‘s Choice kind of decision, where I had to decide whether my daughter or my son needed me more. Ultimately, at 14 years old I believed that my daughter would be able to survive the transition with less damage than if I were to leave the relationship and leave my son with his mother.

It took years to repair the damage I did to my daughter. And I’m sure there are still scars and fault lines running through our relationship, but at 23 years old now, she and I have come to terms with much of it. Yes, we still have our moments; yes there is sadness and some open wounds, but at least we have a relationship. At least we have found a path to be in each others lives. We love and care for each other and show up for each other whenever we can in whatever ways we can. After many years of being just that guy who abandoned her, I am once again her father.

Now, with my son at 10 years old I have a similar decision to make. The relationship with his mother hasn’t gotten simpler… If anything it’s gotten more complex and complicated with many issues that I won’t go into here.

Now I have to decide what is best for the sake of my son. Not for my ego, but for my son. And in that space, I found myself sitting on the fence for several weeks. Finally I decided like most men that sitting on the fence doesn’t do anything other than put holes in your butt, and either side of the fence was better than sitting on it.

So I have begrudgingly decided to go with his mother’s suggestion, and shift our custody arrangement. Up until now, it has been 50-50, with my son traveling back-and-forth between the two houses every couple of days.

This is a difficult way to live as a child. I remember my own parents splitting up, and me shuttling back-and-forth during the school week, leaving my backpack at one house by mistake, my lunch box at the other house, and never quite figuring out how to get my homework done on a consistent basis.

“I hope beyond hope that the foundation I built with my son will stand firm. I hope that what he knows to be true from his relationship with me will stand up against the onslaught of negativity that his mother will pour into his mind about the kind of man that I am.”

Not wanting my son to experience that, I’ve decided to let his mother have the majority of custody during the school week and become a “Disneyland dad.” 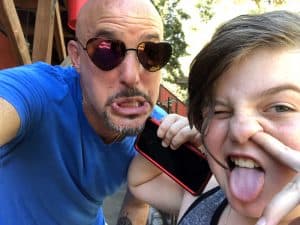 Just saying the words “Disneyland dad” put a ball in the pit of my stomach. That’s not who I’ve ever been. Yes, I will admit to having taken more than a few trips to Disneyland with Christian, but I don’t think there’s anything wrong with that. I have still worked hard to be in his life, and be a real father, giving guidance, support, and trying to help him become a strong and healthy young man.

So as I sit with this decision that I’ve made, the time that I get to have with my son has been cut almost in half. And the days that I would normally have had him I spend alone.

I don’t mind being alone, but it hurts. It hurts knowing that he is with his mother, and my influence in his life will not be a strong as it has been in the last several years. I’m doing it for his own good. At least that’s what I tell myself, but there are certainly some benefits to me: less juggling, more focus on my work, and hopefully more quality time when I am with Christian.

“In this moment, at this time, it feels like everything is on the precipice of change. My boy, my relationship with him, and yes… even me.”

I should consider myself lucky, I’ve been in his life since the beginning. I know a lot of fathers who have had to fight for every second of custody, traveling to the other side of the world to follow after the mother who decided that the middle of nowhere was a better place to raise children.

I’ve heard stories of lawsuits that bankrupted fathers as they fought to have just a little bit of a relationship. I know men who have been in jail, and practically homeless, who turned their whole life around just for an opportunity to see their children once a week. So who am I to complain about a little less time?

And yet who am I not to complain? As a father, I want the best for my son, and I believe a son needs his dad.

So many of us men have these fractured opinions of who we are and what it means to be a man because of an absence of our own father. I’ve always had my father in my life, through thick and thin, good and bad, divorces, separations. No matter what, he was always there for me, willing to drop whatever he was doing at a moments notice. And as I go through the pain of this new arrangement… he is still there for me.

So I hope beyond hope that the foundation I built with my son will stand firm. I hope that what he knows to be true from his relationship with me will stand up against the onslaught of negativity that his mother will pour into his mind about the kind of man that I am. And I hope and pray that in the future I won’t look back at this decision, and rip my own heart out to stop the pain. 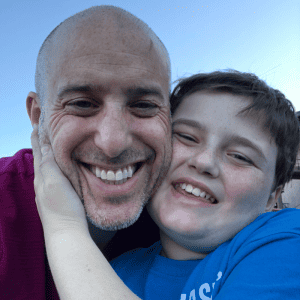 And underneath all of it I cross my fingers, and hope that the truth prevails. I hope that his heart stays connected to mine, and her negative views of me fall on deaf ears. And he remembers that I am now and will always be his father. I will always be there for him. I will drop anything in order to take care of him, support him, or help him to be a better man.

He’s only 10 years old, and there is still a lifetime for us to grow together, learn about each other. There is still time for me to learn how to be a better father, for him to see what it means to be a better man. But in this moment, at this time, it feels like everything is on the precipice of change. My boy, my relationship with him, and yes… even me.

But I will hold firm, I will show up, I will find ways to be in relationship… helping him with his math homework over FaceTime, taking him for long, well-deserved trips over the summer, staying involved with his school and in his life. Doing whatever it takes.

As my father taught me… that’s just what fathers do.