Good morning, gentlemen. It’s good to have you all here at this month’s meeting of The MDI Sessions. Welcome to everyone listening by radio, as well, and online, where you can find us at mdisessions/gratitude/africanproverbs/42/whatisyourcontext/commitmentbeforeego/thisisbullshit.org. Transcripts are available.

You may be seated.

And welcome to the month of November, when gratitude is shouted from every mountain top and bruited about from every news source and magazine rack. It feels kind of like whitewater rapids ahead after you’ve been canoeing on a quiet river for a while. All of a sudden, murmuring way down- river, you know the big water is there and until now it’s been a quiet pursuit most of the trip. But oh, man, is that about to change. Or like you’ve been taking a back roads motorcycle trip and all of a sudden you’re butt up against a busy four-laner.

I would ask you to follow along with me as you are able as we turn our attention to this morning’s reading. Our text is on page 42 of The Book of MDI Book of Common Prayer, which is auspicious because 42 is of course The Greatest Number in the World. (Ed.- Universe, too?)

As every serious Hitchhiker’s Guide to the Galaxy fan knows 42 is the answer to everything. That’s what the computer came up with, so that’s how it is. So I park in space number 42 whenever I can and love when I run into it anywhere. Like recently, when a study suggested that we are 42% more likely to die a premature death, if we are out of shape. Forty two was Jackie Robinson’s uniform number, as well, and is retired from baseball in his honor (except on April 15, when every player on every team wears it.) It’s fun to be a Hitchhiker geek and I’m grateful for this quirky little way of having some fun in the world and making meaning where there is none.

I guess the blessing and the curse of this meaning-making ability is that I can see the number 42 and make it mean anything I want.  Gratitude, too, is often imposed on a situation, something invented because we choose to see it that way. And sometimes it’s just the natural byproduct of a gasp-worthy moment, as Tom Peters, author of In Search of Excellence, might put it. I’m already imagining a lot of those moments in the rest of this year and on into 2019,  as well as many chances to perform a modern version of alchemy, turning shit into gold. 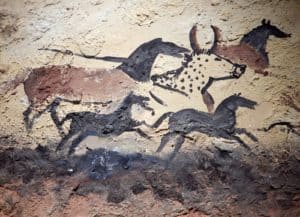 It’s a testament to our insatiable desire to tell stories and make meaning and develop rituals and mythology and liminal space, and to feel more hope and excitement; to enlarge the paintings on the wall at Lascaux. Isn’t that what we’re doing in some measure? Carrying on the ancient painted message that, “We are here?”

Something happens and we make it mean something. It’s like getting an appliance or a toy with the message “Batteries not included,” except the real message is, “Meaning not included.”  It’s a chance to look at what’s happening, and what may yet happen, with fresh eyes.

But, I digress. I’ll read aloud and you follow along with me, okay? On Page 42 you’ll see the heading “Proverbs” and find there this African one, which goes like this: A Lion Chased Me Up a Tree, and From There, my View was Improved Greatly.

Quite a remarkable proverb that one. And it serves up some context for our talk this morning. And, as it also says in our MDI Book of Common Prayer, “The Biggest Context Wins.”

First of all let’s imagine the provenance of this pithy idea. We can see this poor bastard running in terror from a lion, barely making it up the tree with the big jaws snapping at his ass. He makes it to the top and he’s breathing hard and shaking.  “Oh, fuck, oh fuck” he gasps (maybe in Swahili or Zulu? (Ed. note – ‘Oh, fuck’ exactly translates to ‘oh, fuck’ in both Swahili AND Zulu)). Then, as he sits on a limb and feels his heart rate slow, he notices a column of smoke off to the north. And he looks west and sees another village and he keeps looking around and sees a river and mountains and he thinks, Man! I didn’t know those things existed. I wonder how far away they are? And all of a sudden he realizes he’s forgotten about his close encounter with death.

So we don’t know whether this tree-climber was a shaman or just Joe Blow in the village parlance. Maybe he just came back and told a big, dramatic story and said, man I was getting chased by this fucking big-ass lion and I was really scared and I barely made it. And then Joe, or the shaman, started to think about it. Hmmm … a lion chased me up a tree and … hmmm.

We just don’t know how this proverb came to us in the form it’s now in.

Now you can apply this, of course, to all kinds of situations in life. And many of us have been through all (or some) of the big ones: the big losses, the big hits in life. I first encountered this proverb on an Outward Bound course in college and it was used as a sort of a context for making sense out of the discomfort we were going to experience. Clearly we were being introduced to the idea that the discomfort would make us bigger in the long run, and give us a larger point of view.

And then I kind of forgot about it until in 2004 I almost died and spent three weeks in the hospital. The proverb actually surfaced again, unbidden, and I was thinking about how the lion in my case was a microscopic bacterium, and how it chased me up its own version of a tree. From there I could see more clearly.

Then it was useful again in 2011, when my youngest son almost died, in a very similar way, and I told him the proverb and it meant a lot to him and helped him to make sense of everything that happened. We’ve often invoked it between us in the years since then.

So it’s an extremely useful idea – no matter what our particular lion is. It can give us some sense of where we might be at the end of something that, at first, seems only horrifically bad. I’ve often thought that my near-death experience didn’t make me braver in any way I could discern. It didn’t help me make hard phone calls because I was so grateful to be alive. It didn’t ultimately make me more grateful every day of my life. I had to take it as an article of faith, and I still do, that somehow the experience made me stronger and improved my view as the proverb says.

I’m incredibly grateful my son didn’t die and I have had several other experiences, as I’m sure many of you have. I went through my own nasty divorce. I have been fired from jobs and I could go through the whole list. I lost my father when I was five and I have to take it as an article of faith that I can see further because that lion chased me up the tree of my dad’s death. I don’t feel anything about it every day, kind of like how fish don’t see the water they’re in. But I have to assume I’d be a different man than the man I am if my father had lived. I don’t know who that man would be. I do know that if I hadn’t gotten divorced I would not have the amazing wife I have now, in a marriage that’s lasted longer than my first one.

There are lots of moments in life where shit happens and we have to reach into the muck and pull out the gold. There’s dumb shit like waiting in lines, you know? There’s waiting for your wife when you want to get out the door and she has “one more thing, honey.” There’s traffic jams, and there’s seeing Christmas trees already in early October on display inside Home Depot. You don’t have to look far to find some lemon that you need turned into lemonade.

So as we begin The Month of Collective Gratitude, we can take our text from the MDI Book of Common Prayer, page 42, and breathe it and live it and love it and let its light shine even before that badass lion roars.

That’s it for today, gentlemen. See you at the next MDI Sessions.