Readers throughout the world are reading the current March/April edition of Playboy Magazine for the article (!) by Mickey Rapkin about an MDI team meeting in Los Angeles last December.

“Help Wanted – How Do We Fix Toxic Masculinity?” is the title of the 2,000-word essay about the truth that MDI men bestow upon each other.

The author admitted that before he attended the team meeting he half-suspected that MDI was a “cult,” but during his encounter with Team Arrowhead he witnessed “grown men confronting some of their ugliest fears and worst memories.” 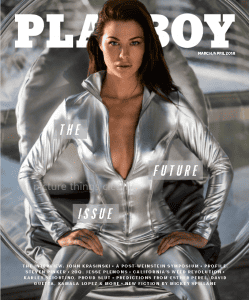 The nine men on the team, he wrote, “appear to be unified by the feeling of having missed out on something, be it an essential life lesson, rite of passage or guide to a life well lived. MDI helps them fill in those blanks.”

Rapkin said some of what he witnessed was “corny as hell,” for example:

“At one point during the MDI meeting, one man stared another dead in the eyes, put his hand on the other man’s chest and thanked him for living his truth. But it can also be seriously humbling. It takes balls to be so emotionally naked.”

The response to the article from MDI leaders has been overwhelmingly positive.

“Purposeful, courageous and committed men serving their families and communities all over the world deserve this acknowledgement and recognition that we collectively are making a difference,” said Abe Moore, Regional Coordinator of the Southwest Region. “As an MDI man I am honored that we were given the opportunity in such a prestigious publication to represent mature masculinity and a declaration of what we stand for.”

MDI President Geoff Tomlinson responded to the publishing of the Playboy article as “truly exciting.”

Rapkin, he said, had no contact with MDI prior to researching the article, but “clearly saw us the way we see ourselves, and is extremely positive about who we are and what we do.

“I’m also enjoying hearing from men who have read the article and observe how, no matter where they live, the team meeting looks very similar to what we all experience weekly,” said Tomlinson, who advised MDI men to prepare for more positive press attention as a result of the article.

The Playboy article was a year in the making. Last February, Rapkin e-mailed Jim Ellis, at the time MDI’s VP of Media and Public Relations, about freelancing a story about present-day masculinity. Although GQ passed on the story, Playboy expressed interest.

“There was some concern about what type of article would be published, but the overall benefit of a story fully outweighed any concern, and we moved forward,” recalled Ellis, who worked with Moore to invite Rapkin to a team meeting.

“Ever since I started in my position, I held the context that MDI was going global,” said Ellis. “I didn’t know how. I just stated it. I imagine some men scoffed at the idea, but I knew it was possible with the right intention and consistent pursuit. It feels awesome to see these seeds coming into fruition.”

Ellis said the Playboy article could spur renewed interest in MDI among men seeking excellence in their lives.

“The time is right for men all over the world to know about MDI, and for them to find their own circle of honorable men in action, pursuing success on all levels,” Ellis said. “Masculinity has been under fire for years, and it’s time men stood up, stepped into their power, and made a difference for themselves, their families and communities.”

His first book, “Pitch Perfect,” about the competitive world of collegiate a cappella groups, was published by Gotham Books in 2008 and immediately optioned by Universal. The film adaptation, starring Oscar-nominee Anna Kendrick (“Up in the Air”) and Rebel Wilson (“Bridesmaids”), was produced by Elizabeth Banks (“The Hunger Games”).

Rapkin’s second book, “Theater Geek,” was published by Free Press in 2010 and was featured on CBS Sunday Morning and in Vanity Fair.