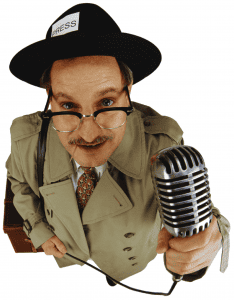 In a move that MDI leadership believes will support the collective men in the long run, the not-for-profit international organization will do away with the basic standard of “be on time.”

A longstanding staple for men who have circled up within MDI men’s teams, the timeliness factor will be a thing of the past.

MDI Executive Director Stan Snow said the International core team and Board of Directors recognized the problem with a standard that no man could ever truly commit to. He pointed to the quandary of committing to an agreement that is out of most men’s control. Citing the unfair quality of the agreement, Snow questioned how a man could absolutely know if he was going to be on time, when there exists variables such as traffic jams, delays with kids, awaiting a wife’s or girlfriend’s outing preparation protocol, as well as the confusing “daylight savings time.”

Dylan Stewart – MDI board member who lives in the San Fernando Valley, a real bottleneck hellhole of a place to live – echoed the ED’s sentiments after a two-hour gridlock forced him to break the time standard. “How the hell am I supposed to ever be on time when I have to take the 405 … anywhere?”

Jim Ellis, former VP of Media and Chief Excuse Squasher even stated, “I was once cleaned up for being late to a meeting that took me and a buddy three hours to travel there. And we weren’t even scheduled to appear.”

Said Snow, who was actually late to this interview due to unforeseen circumstances, “It’s an old legacy from an outdated event, and we’ve never really looked at it before.”

Moving towards a more fair and just system of honor, a special board subcommittee was formed entitled “Fuck This Shit.” The 1-member subcommittee came up with the new standard. Though still up for formal full Board approval at its annual indoor get-together in probably some posh hotel somewhere, the content states: “For a team meeting, a man must be within a general time-frame that is conducive to his well-being, safety on the road, as well as within reason, given the basic conditions with which he had to face.”

According to MDI legal council (whose name is withheld to protect the innocent), the counterpoint may argue:

After delivering the mission statement of MDI, the subcommittee has been known to sing its team cheer to the tune of a song from the Chicago XI album: “Does anyone really know what time it is, does anybody really care?”

[This just in – turns out Tobias Presley is a member of a “FAKE NEWS” station, and should not be trusted. Either that or he is just an April Fool.]