One of the things I cherish about the Legacy Discovery weekend is that men have the ability to own up to the dark side of who they are. Over the course of the weekend, the intimacy of the space we create, with the absence of any inducement to tout false bravado gives men the opportunity to simply acknowledge the scars they may have inflicted on others and themselves.

The magic of those moments is that men come to realize that the weight they’ve carried around for so long is for conduct that is not that unique. Time and again I’ve discovered that when kept hidden the act grows in magnitude, and the potential ramifications seem catastrophic. In truth, we’ve all done things in the past of which we are not proud.

The question is, have we learned from it? Have we grown? And are we willing to embrace that moment for what was – a moment? I’ve become a firm believer that before I could ever go on to do great things and live a fulfilling life I needed to own up to those things in my past of which I was not proud.

Through the simple statement of “This is what I did” without the story, without the justification, without the attempt to paint myself as a victim,. I have the opportunity to bare my soul, be authentic and challenge others to judge me for who I am today rather than who I was 30 years ago.

Why is that important?

I have found that I have spent an incredible amount of time and emotional energy trying to keep a lid on things that I’d rather not talk about. Once I put them out in the open I freed myself from being a prisoner to the fear of others judgment. It is often said that the undoing of great men is not in the crime but in the cover-up. I have also come to find that others are more willing to follow a leader who acknowledges and owns their flaws than one who purports to be infallible. In the former there is the possibility of partnership that comes from relatability; in the later there is the paralysis of having to be perfect.

Would you quicker follow someone who has demonstrated he can rebound from adversity or someone hiding behind a seemingly impenetrable curtain?

I was incredibly disappointed watching the Brett Kavanaugh Supreme Court confirmation hearings, because in my judgment Kavanaugh allowed the politics of the moment to compel him to play the victim rather than offer himself fully for he was: a human being who did not let his past define the life he now owns.

Imagine how powerful it would have been if he had the honesty and integrity to acknowledge that as a high school boy he fell victim to peer pressure and testosterone. Because clearly as an adult no one has accused him of being predatory. In that moment, he gave away the opportunity to create a level playing field between him and his alleged victim and open a dialogue about how to address the confusions of youth. 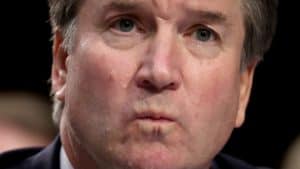 It’s a dialogue I believe is important because the reality is in our youth we find ourselves driven by biological impulses and groupthink. It is not until we mature that we can make more conscious decisions. How many of you have spent the past couple months taking inventory of youthful indiscretions? Had Kavanaugh honored his truth, the conversation could’ve shifted from women as victims and men as evil to people struggling to get a grip on things that can be more complex than the simple black and white of this is good and that is bad.

His failure to do so, in my opinion, will compromise his ability to sway others.

Back to the point.

For example, over time my struggles with Multiple Sclerosis began to manifest themselves in physical challenges. I was beginning to have difficulty walking. Of course, because I had failed to be open with those I worked with that I had MS I spent a lot of time trying to mask my challenges. Stupid things like arriving at a conference room 15 minutes early so nobody could see me limp in and waiting until everyone left before I struggled to stand. Looking back on it, I believe that the amount of emotional angst I subjected myself to, so I could continue to hide the truth, took its toll on my ability to operate efficiently and with excellence. Once I owned what was going on I was blown away by the level of support that was there.

It might prove to be a good exercise to take inventory of all the warts in your life that you have been trying to hide.

How complex are the webs you must spin to keep those truths in the dark? How heavy does it feel? How much does it distract you from doing the things you wish you could be doing?

I would encourage men to make use of their men’s teams to come clean with the shadows in their closet. I have found that the boogey man in the closet becomes a lot less terrifying once I subject him to the light of day. Deep down we all want to be looked upon as being accountable men of integrity. However, we can’t get there until we’re willing to stand naked and own who we are. Sometimes that means having to deal with the repercussions of our actions, but at the end of the day I have found it much easier to move forward after I expose the shadows to the light.

This might mean honoring the truth that the relationship I’m in is not making me happy; the job I have is unfulfilling; or the things I allow myself to be distracted by are not allowing me to live into my true purpose. But I can never get any of that until I allow myself to trust that the universe will reward my honesty even if the reward results in a painful lesson.

I have come to learn that a life well lived is made all the richer by learning to adapt to reality rather than trying to manipulate reality to support a fictitious image of what I think I want. This is not a journey for the weak at heart but at the end of the day I am glad this is a journey I’ve chosen to take.

And I am grateful to the men who have insisted that it’s not taken alone.