Halloween Keeps the Spirits and the Men Afloat 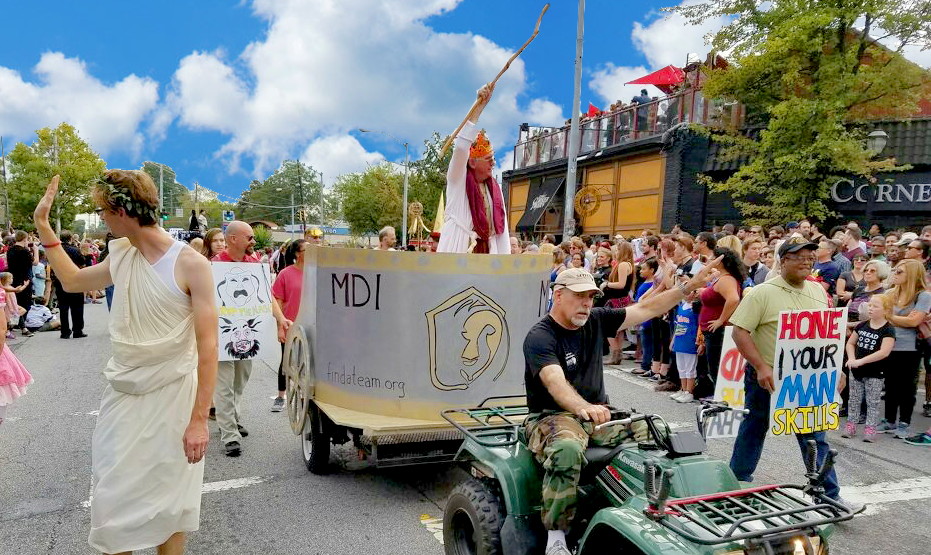 Taking on leading the MDI Dog Soldiers Division in constructing and leading a parade float for a local Halloween parade seemed like a big mistake at first.

Who was I to take on a leadership role in an organization I’ve only been a part of for less than six months? The leaders of the division were really expecting something big. There were many more qualified men who should be doing this. My first action step was procrastination. After men began approaching me with their excitement and encouragement I took on the leadership role with more confidence.

After I worked on how I would like to lead, I took to crafting tasks to make the vision a reality. Many men showed up and offered ideas that worked perfectly for the float design. We ended up deciding on a chariot float to be pulled by men as a show of teamwork and fun. We had a final build night where talented, enthusiastic, and jovial men worked hard to make the chariot a bold and strong statement.

The day of the parade men showed up to provide logistics as well as be a costumed marcher in the parade. The goal of this parade was to touch the lives of 1,000 men. We had 1,000 flyers to hand out to potential MDI members as well as pass out candy to all the little’uns. By the end of the parade we had exhausted our candy supply, and all the flyers had been handed out to men from all over the city.

Man! I felt fulfilled and empowered after the parade event was over. The men had showed up in a big way and had brought their best. Looking back on the whole experience I found that this was a different type of leadership than what I was used to. Typically the leader manages every aspect of the project and is stuck in the weeds. With MDI, the men had their duties given, but they owned the results and put forth a quality effort without me holding their hand or staying on top of the entire process. Also, the men gave me the support I needed by their availability and enthusiasm that I didn’t always have.

I am very grateful that I decided to take on this role to lead the men. It has inspired me to stay connected to this men’s circle and has brought me closer to the men I worked closely with. Thank you men for your enthusiasm and attraction that made leading you a real honor.