Eric Louie did the Sterling Men’s Weekend in March 1995. Ever since he has been a proponent of the initiation event. Though the Men’s Weekend is not a sanctioned MDI event, many of the MDI men had their start in men’s work at that weekend and still support men to attend. To keep the spirit of the Men’s Weekend alive, Louie offers this column, maintaining confidentiality as necessary.

I have two sons. They are about 1 year apart, 31 and 30 at this writing. They are different men. One is 31 years old, married for over 10 years, good job, five children; one would credit him as successful. The other is 30 years old, works retail, not fully self-sufficient, seemingly humble, still searching for success.

I am the father to both of these young men. I don’t believe I treated them differently as a father. Both had opportunities to do athletics. The older one played ice hockey and did so passionately and aggressively. The younger played soccer for one season, no more. I don’t think I pressured either one, as boys, to do anything they didn’t want to do. 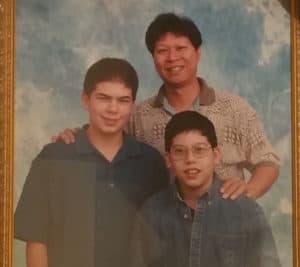 They are both millennials, and love computer games (not so much video games anymore). Neither one has a college degree, unlike all of their uncles (my brothers) – perhaps a values statement for their generation. They both share a strong opinion about their vegan mother (which I did not encourage). Socially, they are pretty good interacting with others – both good with their grandparents. And they have a good work ethic – show up on time, work hard during their shift, loyal to their employer. They are both cooperative and respectful.

How are they different? The younger one seems to take life very lightly, as if there is no urgency for anything to get done. He has some views on life and some viewpoints or perspectives that one might find unrealistic. I’m not sure what his values are, and what he’s willing to “fight for” to use our men’s division lingo. The older one doesn’t take life too seriously either, but he has a strong sense of responsibility. I guess they both have a sense of responsibility – the younger one is now pretty much responsible for transportation for his grandfather (my dad). The older is independent and owns a home and two cars. The younger is somewhat dependent and received his car as a gift from his grandmother (he took over her car when she stopped driving). The older is a good card-carrying NRA member and has a gun safe. I don’t know if the younger has ever discharged a firearm. Younger son has lived in a different city on his own for a few years, which is a form of independence.

I don’t know if either man votes. I don’t know what their religious beliefs are (they spent 5-6 years at Christian schools). They do honor their ethnic heritage, as much as they have learned about it. There’s no obvious prejudice in either of them. They are both intelligent and articulate.

There’s a concept from the Men’s Weekend that I have tried to follow, and that’s to treat your sons as men. The actual teaching is a little more detailed than that, but for the sake of confidentiality, I’ll leave it at that. A dad is supposed to do that even when they are boys. The purpose is to prepare them for life. So the question that I pose is: “Did I fail with one and succeed with the other? Or, did what I do make any difference at all? Or, is it just a matter of them growing up as different men with different personalities and values and abilities?”

This is my family. My offspring and legacy. My living contribution to the world. And I love them both, differently but equally.

If your children don’t turn out the way you wanted, then trust that you did everything you could to make it so.

1 thought on “Family and the Tale of Two Sons”