Who’s that Guy in Paris?

A word about the photo above. That would be this author outside Shakespeare & Company, the iconic bookstore on the Left Bank in Paris. The occasion was my 50th birthday (2003) and I was there with my wife Karen, who took the photo. There’s a great little place just out of sight of the camera where we sat al fresco and ate escargot and drank wine. This is the second iteration of Shakespeare & Company.

The first one was founded by Sylvia Beach, who was the only one willing to publish James Joyce’s Ulysses, which was banned, for example, in the US for its language. Hemingway was a frequent guest there, as were many of the literary lights of the age. You can feel it when you walk in. So it seemed highly appropriate, book lover that I am, indebted to so many writers, that I have a photo like this one. 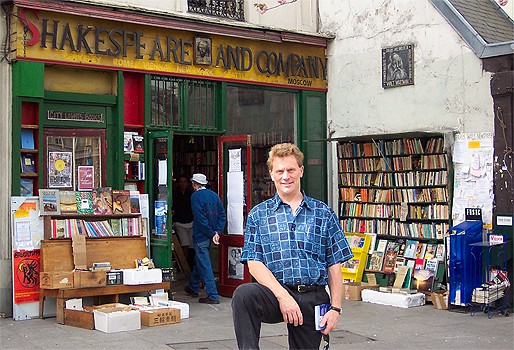 There’s another one of me standing in front of the grave of Proust over in Pere Lachaise Cemetery and yet another standing in front of the grave of Jim Morrison, whom I guess we’d call some kind of an American writer. Hemingway called Paris a moveable feast and “the town best organized for a writer to write in that there is.” I have to take his word for it, because I didn’t have the balls then to have come out as a writer.

My first journey to the City of Lights was in the winter of 1992. Freshly divorced and single, I had been planning a ‘fuck-it’ trip to France and a man on my first ever men’s team, whose own trip to Israel didn’t work out, decided he’d come with me.

I made some notes in my little pocket notebook while I was at my job today with memories of my first trip in 1992, with D.  I wrote about Solsbury Hill and how that was the first tune we heard on the boombox which was way too fucking big to have brought with us in our luggage. But since then Solsbury Hill has meant more to me, it’s meant Paris, it will always mean Paris.

I wrote about nine franc beers at the Louvre and how we never made it to the Mona Lisa because of it. I wrote about Parisian women and how they lock your gaze and seemed comfortable in their clothes and with their sexuality. Dave and I would sit in the tabacs and bars and drink and just watch French women. We’d start in the morning with coffee, then switch to various kinds of alcohol in the afternoon. I don’t know if they knew we were American. I had a beer with a friend of a stateside friend who told me you just look American. Not sure if it’s the walk or what.

Made me think of the scene in Chariots of Fire when the American athletes showed up for the Olympics and how the energy changed. Whitman had a phrase here or was it Sandburg? Guess it was Whitman in Leaves of Grass.

To ascend, to leap to the heavens of the love indicated to me!
To rise thither with my inebriate soul!
To be lost if it must be so!
To feed the remainder of life with one hour of fulness and freedom!
With one brief hour of madness and joy.

Jim Morrison was an American in Paris who drowned and gagged on his own puke.

I wrote about how someone told me you should always come back from your first trip there broke and I did that, though I was kind of already broke. Can you be more broke? Broker? Brokerer?

He had been planning a trip to Israel that fell through and when he heard I was going to Paris he asked could he come along and I said sure. So we hung out together in Paris for quite a few days and didn’t really get that tired of each other. Sometimes we’d go our separate ways for most of the day then meet for lunch or dinner or women watching.

We both managed to get laid.

I found a publication called French-USA Contact and we went to a mixer and he met a woman who ended up becoming his next ex and the mother of his daughter. I met an architect and thought I was so cool because I could order off the menu in my pathetic French and she humored me and we ate and drank and wandered around the Latin quarter and ended up in her bed and she asked me if I had a préservatif and I guess I did because we had sex and then she wanted to move to the US and shack up and I couldn’t get away fast enough and we listened to Cat Stevens of all things and at one point I thought she was asking me to get up and sleep on the couch because of my pathetic French, which wasn’t what she was saying.

Anyway it sure seemed like an American man would have to work hard not to get laid. And she wrote me letters when I got home and left me voicemails on my old answering machine, you know with the cassette thing and the plug-in, and my kids were curious for sure about this mysterious French caller and I had about four pieces of furniture in this apartment and a kitchen with beer, coffee, and pasta (all the basic food groups) and laughed my ass off listening to Sam Kinison, all the while feeling like a piece of shit because I had so thoroughly managed to fuckup this long-term marriage with three kids and I didn’t even know how I had done it.

I still had a ponytail and a beard that I had let grow while climbing in Alaska and I had a motorcycle and smoked a lot of pot and cigars and I was a serious midlife cliché divorced man whose sails were seriously in irons and I was on the rocks.

But I did go to Shakespeare and Company while I was there and I followed some kind of bliss, as Joseph Campbell says. Even though I was too afraid to come out as a writer, which may have been the original reason for my wilderness wanderings, I knew enough to be there in 1992 and then again 11 years later after eating escargot and seeing the graves of both Proust and Jim Morrison and wandering along the Seine and climbing the Eiffel Tower with this amazing woman who really got me, even after seeing me at my worst, and took this photo.