What An F’ing Stupid Thing To Do 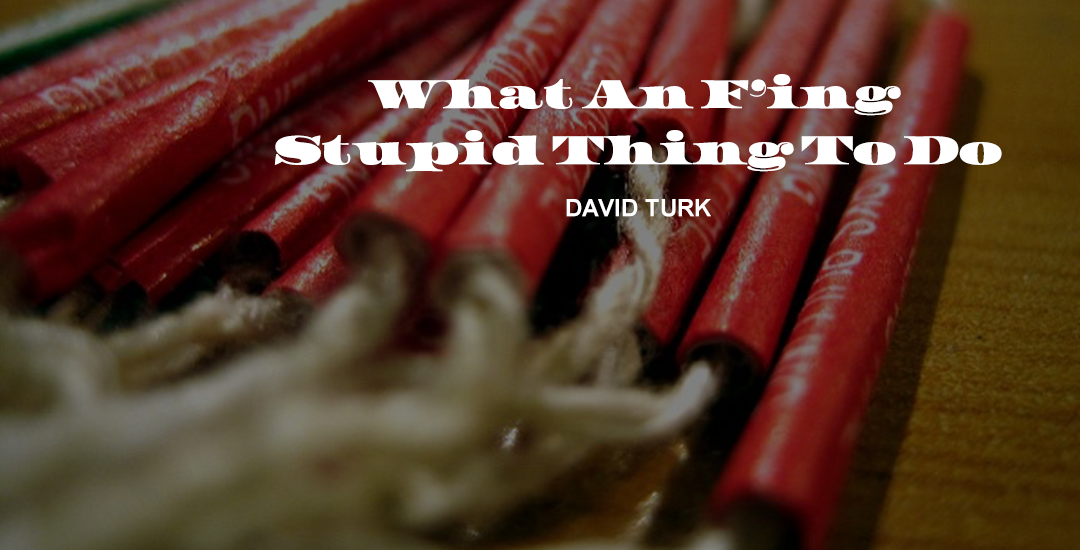 It was Chris, Keith and John. They were there. We were about 10 or 11. And our plan seemed like a great idea.

I was normally one of the good boys. You know, a hard-working kid in the family, getting good grades and all. Well, one day I wasn’t so “good.”

I was with my buddies, and my parents were out for the day. We thought, “Man this is so cool, we can light our firecrackers.”

Now I grew up in Westchester County in the nice quiet town of Larchmont. My mom was like the prototypical June Cleaver, Donna Reed Midwestern Irish Catholic mom who could do no wrong. I had a nice room with a bed next to a window, from which I would stare at misty nights looking at the moon before going to sleep.

It was that window my buddies and I decided to use the day my parents were out doing their own thing.

And so the plan was set.

That day, we opened that window and got out our firecrackers, 20 to a pack.

We lit one firecracker in our hand, stepped back one foot, and then tossed it out of the window, watching it go off outside.

We did that for about 10 or 15 minutes before we decided we’d have to get a little more adventurous. So then we did a couple at a time.

Again, time passed, and we’d have to up our game… especially for the “Grand Finale.”

We chose to light two packs at once – up to about 40 firecrackers. The plan was to step back 8 feet, light them up, and then get a running head start before really launching those firecrackers out the window in a sidearm fast pitch.

Do you all see where this is going?

Well, wouldn’t you know it, the thing doesn’t fly out the window but instead hits the window jam and catapults back onto the bed. There were firecrackers crackling off all over my bedroom, ultimately lighting the bed on fire.

We all jumped on the crackling flashing crackers trying to smoother them out. After we extinguished them all, the bed sheet had a gigantic hole in it. I thought “Ah fuck – I’ve never made a bed from scratch in my entire life.”

My friends and I decided to get rid of the sheets (the evidence), so we went up to the woods to bury them. We then got out some clean sheets since I knew where they were in the house. What I didn’t know was that my mother counted the number of sheets. A few days later she asked, “Why are we missing bed sheets?” This, added to the fact I didn’t know how to do any deep cleaning, revealed the truth. After moving the bed aside, there was all this shrapnel all over the wall.

After having to suffer through the disappointment of my mother and then the ass-kicking from my dad, I realized I had thought I could get away with it. I also knew how it was a stupid fucking thing to do.

But that’s what young men do sometimes.

I also can laugh about it now.

And that’s something men can do.