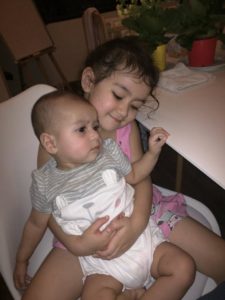 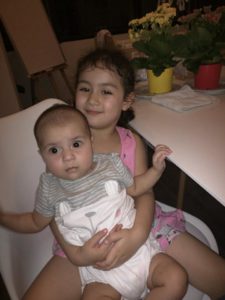 My first daughter arrived in a huge birthing room in Massachusetts, in one of the world’s great hospitals.

The labor was not easy. Like any man who attends such an event, I knew I was in over my head, and I saw things I couldn’t unsee for a long, long time. There’s a reason the ancients with their red tents, and even the modern medicos, used to keep us the hell out of there. We could fret in the waiting room or pace the floors in the hall, but that was the closest we got. At 56 years old and thoroughly modern – or so I thought –  none of those years, nor birthing classes nor nephew and nieces being born, had truly prepared me for this.

After hours of pushing and drug-induced hyper-contractions, my wife fainted. From then on it was my job to lift and lower a spent woman at each contraction, hour after hour, until I thought she might expire and my arms were a-throb with weariness and pain. When it was over, Truc was unconscious, torn and bleeding. There had been calls of STAT! and pounding feet in the halls. Sudden light, a rush of air and a dozen people filled the commodious space that had been nearly empty moments before. An obstetrician ran in, just on-shift and still in street clothes. I remember his roll-neck sweater against the February blast outside. He yanked a stuck shoulder out and Kailin – purple and not breathing – was born.

I was standing, swaying, in the gloaming aftermath, arms hanging, exhausted but terrified, looking left, then right and wondering if either member of my family was alive.

I approached the midwife and croaked,

And then I heard a tiny cry from among the crowd across the room and knew that my baby, too, was going to be OK.

I collapse in a chair, sobbing as deeply as I ever have as a man.

Now, relationships are tricky and cannot truly be quantified. We have no language, no real measuring tools for love, for care, for devotion or duty. In dating my wife there was a time when I became aware of her importance to me. After awhile her meaning, her value, took up greater and greater space within me. And then came the moment when it was clear to me that, if I must take a bullet or jump in the way of a careening bus to save her, I would. This process took perhaps a year, maybe two.

Not so here. A nurse put a cleaned and neatly wrapped package in my arms, still deep blue and bald and Buddha-like. It was like a circuit closing or a dam breaking. A lightning strike directly into my cells. Instantly, I knew I’d take the bullet.

The echoing thunder hasn’t receded yet going on four years. Countless diaper changes and spoon-feedings and playtimes later, I can still hear the echoes. I have never felt this close, physically or emotionally, to another human being.

So it came as a shock to me, when my second daughter was born, to find things were different.

We had moved to my wife’s home country, Vietnam, to have #2. We wanted help, people around, other family and friends as caregivers. There is a little maternity hospital across the street, and Annika was born in a room so tiny they could have tucked it into a corner of the one in the states and never found it again. I was not allowed in.

The call came unexpectedly early. We all pounded across the street and I was perhaps the fifth member of the family-and-friend contingent to get in the room. All was well, the little package was there nicely gift-wrapped as before… but the instant spark was not. Perhaps it was being shut out of the whole process; perhaps it’s just a mystical thing. But the instant knowledge that I would give my life, without thought, was missing.

In the months since I have pondered over this, as my 3-year-old moved toward four and my baby is growing fast. Yet it’s been months of her spending much of her time upstairs with grandma, or if she cries the nanny swoops in and grabs her. I hold her and some auntie, or a neighborhood friend, scoops her up and, whoosh! She’s gone.

I love her, measuring stick or no, but it’s not the same. The intensity, the sense of falling in love so deeply. Will it come later? Will we ever be as close as I am with my older girl?

I can but speculate. Yet at the same time, this is in part why we came here. My daughter is loved, not just by Truc and me, but by grandmas and grandpas and aunts galore and a million of my wife’s friends, and her sisters and her brother and…

At the end of the day, I’m a victim of my own plan for her to have more family around. For us to have more help.

The first time I was Truc’s sole family support during hours of labor. I was the first person to hold Kailin in my arms, to change her, to swaddle her.

Once she came home I was awakened a dozen times a night, holding, carrying, rocking, singing – you all know the drill – for three years. Just us. And it kept us incredibly close.

Yet here, as I watch Annika get passed around like a football, and see one person after another delighted by her, snuggling with her, caring for her, I can’t but think we made the right choice, even if there’s a little gap for me.

If it takes a village, we’ve got one. And if that’s the kind of bullet I have to take for my little girl, so be it.