What follows is admittedly dark and some might judge as fucked up, so here’s my disclaimer. These are my views, thoughts and opinions. They are not MDI’s nor the editors of Legacy. I own them completely. If you wish to discuss them, call or text (908) 693-0313.

I am writing this in June 2018. There is a lot in the media about suicide. This is not about that. I don’t purport to understand it and my only naïve antidote to combat it is MDI and organizations like ours because we are a stand for no man being alone. Rather it is about me remembering the two contexts that got me through my youth.

There is no reason to fear anything because suicide is always an option.

No matter how bad things seem, they can always be worse; I could have been born in Hiroshima in 1945.

These are hardly uplifting mantras but they gave me the strength to take on everything and avoid the cesspool of self-pity. They offered me the freedom to be me. Holding on to them both I was in my judgment able to weather some pretty dark stuff and accomplish some fairly incredible things.

Today, I no longer hold the first to be of value because with a 29 year marriage, a family and a series of very deep relationships I get that suicide might leave something of an emotional and physical mess for others to deal with. It is something I prefer not to do. Interestingly, I believe I am now more cautious and risk adverse as a result of putting that one on the shelf. I’ll leave it to others to judge if that’s a good thing. 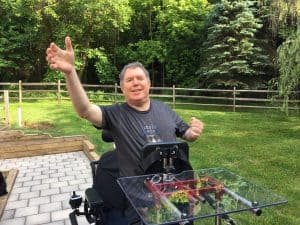 As for the second, my adherence to that has shifted as well. When I was younger I had two fears. The first was being trapped in an enclosed space. So I’d go caving a lot and submerge myself in sensory deprivation tanks until I became alright with the stillness. The second was the thought of becoming a paraplegic. I was very physically active, recklessly so, and I couldn’t imagine a life without my physicality. So I selfishly spent a lot of time volunteering to work with disabled kids and for 15 years served on the board of a non-profit that provided housing and social services to adults with developmental disabilities as a way to remind myself, “but for the grace of god…”

Then “GOD” caught up. Three years ago I lost the ability to walk as the result of MS and slowly I am losing my ability to move at all. Kind of ironic. In a sense I am now in my version of 1945 Hiroshima. Time for a new context. These days it’s become a little more immediate.

There’s always one thing I can do to get me a little closer to where I want to be.

I no longer refrain from acting until I have THE answer. I no longer need to be right. And I fully embrace that I can no longer do it alone. Anyone who knows me, knows how hard that last one was to accept.

I have learned and now accept that what I think might be the “one thing” might not move me at all. It could even move me further away. But focusing on one thing makes it easier to act and if necessary adjust.

So while I still hold my original contexts to be true, I no longer have to turn to them if I first ask myself, “What’s the one thing I can do to get a little closer to where I want to be?”