Have you ever seen one of those old-time movies with the sword fight between the good guy and the bad guy? You know the type. (You do, because I’m projecting on you as if you have lived my life, seeing what I have seen.)

In the sword fight, the good guy gains some advantage because the bad guy somehow drops his sword. The good guy – noticing this – desires a fair fight so he picks up the sword and gives it back to the bad guy. After awhile of more honorable fighting, the good guy is the next to drop the sword. Does the bad guy give it back to him so that the fight can continue on an even playing field? Fuck no; he’s the bad buy. Fucking bad guys like to have the advantage and the leverage so they can win. They don’t give a shit about honor, fairness, a true victory. They want to win at all cost, so they do whatever they can – cheat, lie, use leverage – to prevail over another. (Footnote: of course since the movie has to end well, the good guy uses his wits and cunning to get out of this predicament.)

Some may scoff at this idea. Isn’t dropping a weapon part of the battle? Aren’t we all looking for the competitive advantage? Don’t we all want the marketing ploy that puts us ahead of others in this capitalistic market? Aren’t we all wanting to win, and therefore win over another? Wouldn’t leverage help out?

It’s not so much about the idea of winning or losing. If we use the example of a sports match, it’s about what you use in order to get to the win column. Do you cheat to win? Do you use spying videos in order to get some advantage over the other teams that may oppose you? Do you break the rules and look the other way, hoping others do as well? Do you attempt to bully another so they are weakened in order for you to be strong? All these show up in sports, but they can show up in everyday life as well.

And where does leverage show up in our world?

Another good example comes to mind when I think of this old episode of Get Smart. Maxwell Smart Agent 86 was in Washington DC in his apartment, and having not paid the electricity bill, there was a question whether or not he could be held accountable to this oversight. Said Max: “What can they do? I’m in Washington and they are in another city.” Just at that moment, the lights went out. Next line: “I’ll send them a check in the morning.” Max tried to use avoidance leverage over the electric company, and the company had its own leverage to use over Max.

In all these above scenarios we have examples of humans positioning themselves for advantage rather than simply working for integrity and everyone’s well-being. Where would you have to come from to pull for everyone’s good? The heart of a human. Where do you come from in order to make sure you get your way? The selfish, controlling mind. In this latter case, you just might be surprised to find yourself cast as one of the “bad guys” found in those old movies.

Here is the bottom line: only bad guys use leverage – since it comes from a place of underlying separation. But you may ask, “Isn’t there separation anyway, as in the sports matches?” On a deeper level, no. Even the competitors on the gridirons and in the boxing ring work with unifying concepts such as agreed-upon rules and regulations, with referees or umpires to maintain the fairness and unity. 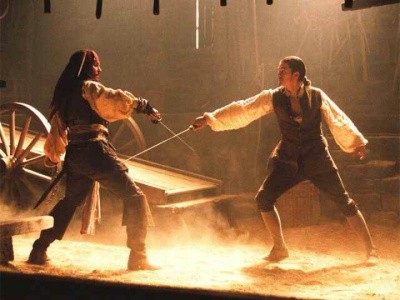 Leverage is the secret evil of this world. Don’t think because you have it, that you truly want it or truly benefit from it. For in the long run, at its core foundation, you find separation and ego and control, all pathways to your own demise and darkness. In the big picture, you are either at the mercy of someone’s leverage, holding leverage over another … or you are free.

In the state of freedom, beyond controlling another or being controlled by another, you have the opportunity to simply walk in the light, live in integrity with a common good, and do the right thing that benefits all. It still may mean competing with another – and you will want to give your absolute best to win – however the competition will take place on a fair playing field, with mutually respected ground-rules … and a sword for each honorable warrior.

Jim Ellis is an award-winning writer living in San Diego. He can be challenged to a duel at www.LegacyProductions.org.

2 thoughts on “Leverage – Your One Way Ticket to Hell”