In 1987, our reluctant hero was foreclosed, divorced, bankrupt and almost jobless.

In March 1988, a wild 48 hours with 200 Men in NY, NY, something happened. It didn’t look like much right away, he was still a New-Agey, pasty English twit, musician and scared shitless of all the burly rednecks on the CoastMasters. But he hung in there. He was challenged to produce an event as production team manager (PTM) – thanks Groves!

“Father Sons and Brothers Day” for 400 Men and Justin Sterling and Peter Rosomoff were there – Holy Shit! – it worked and it was a great event.

Then he went on to producing – PTM-ing the legendary Vancouver Rhinos five or six times. Define Rhinos – well it’s a fraternal meeting, usually in the wilderness, with some significant content. He wore the White Shirts 10 times in the early 1990’s.

“Oh and I want a Manual, a video and you can only have 20 Men on your Production Team” …

On the Sunday, before the Event, the Production Team was so far ahead of the game, that our reluctant hero and some of the production team, built BORIS in three days. Nearly 300 Men were on the beach in the dark, in the wilderness, at Hale Creek, in Sasquatch country. He designed the opening ceremony – the BIRTH of BORIS – Welcome to the Rhino – see video attached – you had to be there!!

Yeah, the buggers on the production team threw him in the Lake!

The Rhino Manual was crystallized and battle tested for his Production System.

At Christmas that year, when the legendary Russell had a stroke, he was asked to be Guardian at the Gate at the hospital for Rick for his last 11 days. He held Rick’s hand, thanked him for all the men and kissed him goodbye, as Rick died.

Going back to January 1990, on the Monday after, Andy Vine and he, being true Monday Morning Quarterbacks, full of bright ideas and shoulda shouldas, were chatting.

“ Great Rhino!!’
“ Yeah, Great Rhino!!”
“Yeah, but some of the stuff that came up on the Saturday night is a bit much for some of the sons who were there.“
“ Yeah, “ says Andy. ”We should do a weekend just for teenagers!”
“ Right, You’re gonna have to fight to get me out of your back pocket, LET’S DO IT!”

In that moment – the Young Men’s Adventure Weekend was born. Three months later we had our first YMAW on Gambier Island, Howe Sound, just out of Vancouver, with 25 Men and 50 young men. He was the PTM and Andy was Program Manager. They cobbled together some Totem Spirit creatures and some wild games and off they went – here they all are. 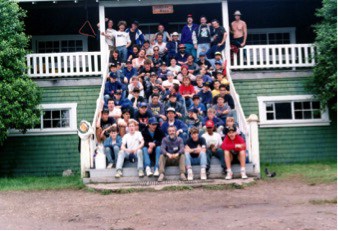 It became apparent that YMAW had a life of its own and was dragging us along with it.

Most men came and went after three or four or five years on Production, about a dozen men have PTM’d the event, But he was always there, moving it forward, initially being dragged by his collar by the ‘Spirit of YMAW’ – the unseen Elders Bench.

Til he realized he was the Servant of the Weekend and got to work in earnest.

Now, 30 years on, close to 10,000 men and young men have participated in YMAW or its offspring. An unintended consequence is that the men often get more out of the Weekend than the teens.

“Whenever we put on an Initiation for them, we are all in the same cauldron and none of us are immune. We are all going to get something, usually involving the next rung on our ladder.” It says in the book. This Leslie character has been the co-founder, PTM, Spirit Keeper and Mentor and continues to be a strong advocate for the NEXT GENERATION OF MEN.

Back in the day, there was a thing to define your Life Purpose or Mission.

All he got was some buzz words – “I seek to make a positive difference in the World.” But never any confidence behind it, but after keeping his head down,  ploughing the field for five years or so, he looked up and turned and saw the field he had been ploughing. He didn’t know what his purpose was until he had been doing it for five years. Over the years he has PTM’d 50 successful events for the men and young men.

Matt Lyons, yes THE Matt Lyons, was heard to say on and MDI Mentors call – “He is the Quintessential PTM.” In 1998 he was the PTM for Howard LaGarde’s New Frontier Rhino on the beach at Pescadero in Sunny California, invited Safety Manager Dr Mark Schillinger and photographer Cole Cameron up to YMAW back at Hale Creek on Harrison Lake in Oh Canada. Schillinger got so lit up by YMAW that he swore he would take it to California and do it for the rest of his life. Now Young Men’s Ultimate Weekend is in its 20th year and was on CNN on Nov 29.

In 2008 Tom McCarter, THE Event Planner, asked him to be his Running Mate for the first ever Internationals in Las Vegas at the now gone Riviera.

Yes, we brought BORIS there too. On the Sunday am session, he stood up and talked about working with Young Men’s Initiation, 20 or so men stood up. Gary Wendell took names and numbers and two weeks later on our first call  – the KINGMAKERS was born.

The KingMakers is a council of elders/senior men that have been doing Young Mens work for 10 – 20 years or more. We exist as an archive, network hub and support for ALL Young Men’s Initiation work. Over the years we have had 40 or so men come sit by the fire. All are welcome. We have met, by phone and now ZOOM every second Wednesday since then.

So, our reluctant hero never set out to be a hero or to build a legacy. He never had a job that he was elected into. When a job needed doing, he knew how to do it and just did it, working in the trenches, following his calling … following Their Calling.

Some higher force is driving this bus. It has all been battle-front training, no books involved here. And now 30 years later, it looks like he has built and will leave a legacy, greater than he could ever imagine.

Thank you to All the Men who have got me here. Leslie, BS, March 1988 – lives in Vancouver with his pianos, guitars and carving bench.

“My men rise me up.” Leslie said that.

We were on CNN – THIS IS LIFE – with Lisa Ling at the Young Men’s Ultimate Weekend in California last August. Watch the full show – Many thanks to all the MEN that have helped us for 30 years to get this far. LINK HERE

2 thoughts on “Discovering a Path of Purpose and Influence”