I started to hate Christmas shortly after my first wife and I had kids. Had I been engaged in gratitude work back then, I might have confronted my burgeoning disgust and resentment before it really took root. Someone would have challenged me to look at how I stressed everything that sucked instead of asking “What’s great about this?” … as I would now.

But I didn’t have a team and instead, as a good soldier, I grudgingly went through the motions of creating some kind of ‘magic’ for my three children, setting up the tree and the decorations, trying to find out what gifts would work. When packages were finally handed out, I wondered, will I measure up? I just didn’t know what the hell I was doing.

When their mother and I divorced, I moved out and didn’t have to deal with Christmas directly, though the kids nonetheless expected presents and fun at the holiday season. I still didn’t have space for more than what I saw as a vast commercialized hoax – though I certainly appreciated the massively increased Holiday sales at my bookstore! Yet, I didn’t want to teach my children about consumption, how to be good Americans, keep the economy churning.

I was not going to win any “Father of the Year” awards, that’s for sure.

My second wife, Karen, and I did a good job at first, coming up with stuff to give them but, slowly, we drifted into ideas like donating money in their names to some cause. In a word: not their favorite thing.

By the time Karen and I moved to San Francisco I was sick of the whole thing. She had her own wounds about Christmas, not to mention we were broke. So I quit, I walked away, I stopped sucking it up. Instead we did Christmas like the Jews we knew: go out for Chinese food and take in a movie. Also no cards, no gifts. Incredibly, this included my family and my kids. In short, I had turned into an asshole about it. A Christmas Asshole. My kids felt slighted, and I can’t say I blame them.

Slowly though, over the years, we started to appreciate the season in a new way. I found myself admitting that I enjoyed the lights as they multiplied day after day. I warmed to the music too, even some of the kitschy stuff, and I began to appreciate the fact that this holiday was deeply meaningful for many people in my life. And I softened around the edges, became less cynical, I could attest that there really was some sweetness about this time of year.

That’s the lesson I’d missed all those years: focusing on the crap rather than looking for what was wonderful about the season. I didn’t give myself a chance to imbue this day with my own meaning.

Even this year, when our team discussed Project ELF and how many kids we were each going to sponsor, I could have thought, “Wow, how great it will feel on Christmas morning! When these homeless kids get a package and it’s something they really wanted and they feel included and like someone loved them!” Instead I kept thinking, “I just don’t care about this. I don’t care about children learning how to be consumers” I mean, ELF stands for Everybody Loves Families for chrissake. There have been Jewish men on my team who care more about this than I do. Jews better at Christmas spirit than I, who once were headed for the seminary? 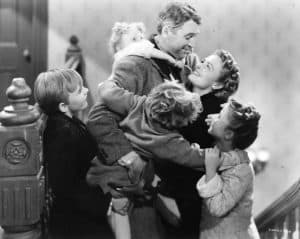 Over the years, Karen and I developed a ritual of getting up on Christmas Day, having our coffee, switching to mimosas, eating smoked salmon with poached eggs on bagels and, of course, watching It’s a Wonderful Life. We cry in the same place every year, though at this point we can recite the damn thing by heart. In short we started to create meaning, all our own.

No matter where one is on the continuum of belief in biblical inerrancy, it’s fair to say that nowhere in scripture is there any meaning assigned to the date of December 25. No one has any idea when this birth took place and I just can’t make it mean anything. My own son was born on December 20: I was in the room when it happened and I have the birth certificate to prove it. That day is meaningful to me.

For a long time now I have been learning that I can imbue anything, anything at all, with meaning, that it’s my choice.

So, I’ve decided to give meaning to this, from Macrina Wiederkehr, the Benedictine Monastic: “Holiness comes wrapped in the ordinary. There are burning bushes all around you. Every tree is full of angels. Hidden beauty is waiting in every crumb.”

As a context for Christmas I could hardly do better than that.

4 thoughts on “A Christmas Asshole”