When I got Nick Warr’s invitation to travel back to Vietnam, my balls shriveled.

We were there during TET of ‘68. A TET is the lunar “new year” in Vietnam, a combination of our Christmas, New Years and Thanksgiving, where traditionally everyone returns “home” to celebrate with their extended families.

But Nick and I had a special connection. We were in the USMC Officers’ Basic School together, class of June 67 and soon after we deployed overseas as Infantry Platoon Commanders.

When the North Vietnamese launched their massive TET offensive in late January of 1968, they quickly overtook the City of Hue and had a couple of weeks to entrench themselves in reinforced bunkers and strategic defensive positions. For days, a communist flag flapped over the Citadel of that ancient historical site daring us to take it down. Today, that restored and beautiful city is a UNESCO World Heritage Site.

Back in 1968, Hue was so revered and politically protected, the Marines were ordered to take back the city without using air strikes, naval gunfire, mortars or the 90-millimeter cannons on their tanks. With ridiculous ROE’s (rules of engagement) like these, it was no surprise that Nick immediately lost his whole platoon when the first burst of machine gun fire swept the street in Hue designated as “Phase Line Green.” This is also the title of Nick Warr’s book which became required reading for Marine Corps Officers. In a forceful, diplomatic manner, Nick made the Marine Corps aware of how they violated leadership principles by succumbing to political pressure.

For me, this was just one of the memorable ways the Marines fucked us grunts.

My immediate question was, “Nick, why do you want to go back?”

“Well, Fred, if you’ve seen the Ken Burns documentary about Vietnam, there’s a lot of missing information, and I want to set the record straight. I’m bringing a film crew with me. We’re spending a week in Hue to shoot what will be a trailer for a documentary, and I was wondering if you’d like to come over with us. There are several people who are going to tour the northern part of I Corps where you served so I was hoping you’d come along.”

In the everlasting tradition of “Semper Fidelis,” I said yes.

When I contacted VietnamBattlefieldTours.com, completed the forms and paid the price, my nuts shrunk even smaller. They advised me to find a roommate. I was sure this would be a return trip to hell.

(See this video for Nicholas Warr dedicating his life to enlightening America about the truth of war. If you go to the 48:17 mark, you can see Walter Cronkite’s “original” February 14 news report, so different than what was actually reported to the American people several days later – One of many stabs in out backs.)

Houston, TX was the rally point for our tour, and a group of us were sitting around a long table chatting and watching our tour guide look up information in his computer to locate places we want to visit. A tall man with nice hair and a deep, distinguished voice suitable for radio or TV announced he has a slight problem with his eyes and wonders if anyone would like to be his roommate. Of course, I volunteer.

When we take a break, this guy pulls out a pack of sticks, flicks them at the floor. There a long, white walking cane snaps to attention. He looks towards me and says, “Fred, lead me to the bathroom!”

“What the hell! I thought you said you had a SLIGHT problem with your eyes?”

“No. What I said was I have a SIGHT problem. After Vietnam, I had a very rare reaction to the malaria pills they gave us and over the years I gradually went blind. The odds were one in a million so I guess you could say I won the biggest lottery of my life.”

“Well, you’re going to have to tell me what to do, man. I don’t know a damn thing about helping a blind guy.”

“Just give me an elbow I can hold on to, either one, and we’ll do fine together.”

My new friend’s name is Earl William Anderson, Jr. His friends call him Bill or Andy. He’s married and lives in Rutland, North Dakota. He served with 1st Battalion, 5th Marine Regiment, in Companies D and A as an infantry platoon commander in 1970. He later became an attorney, then served on the county commission. When he left for this trip it was 30 below in North Dakota. His wristwatch speaks the time. He uses Siri on his iPhone to make calls and to remind him of appointments as well as a myriad of other uses. He doesn’t look blind, but I can assure you he is and doesn’t let that hamper his life. He quickly determines the layout of a hotel room and finds the bathroom. Using his hands and stick for his eyes, he finds the faucet handles, the toilet, the towels and the toilet paper.

At the dinner table his hands gently flutter over everything until he finds all that he needs. At our first dinner in a nice hotel in Vietnam, the servers are very attentive and peeled a couple of shrimp for him. I helped him with the selection of spoons for soup on our 8-course meal. Bill was patient and polite. He didn’t really need their help.

His vision began to debilitate little by little after 1970. He is a great conversationalist who listens as intently as he speaks and has a sharp sense of humor and a genuine laugh that reflects his positive attitude.

When I said we were on this tour to “validate our nightmares” he said he would rather think we were going there to shed a new light on our experiences. I realized right then his sight was better than mine and my admiration for him grew stronger each day.

We had a great tour of Vietnam. Nick Warr and some of the men who survived the battle of Hue stayed there as the film crew videotaped their stories. The rest of us went further north and toured Dong Ha, Con Thien, Leatherneck Square, the Cua Viet, Lang Vei and Khe Sanh. Later, our group reunited, flew to Hanoi and visited Ho Chi Minh’s tomb and the Embassy dormitory where we had pizza and beer with the Marines serving there today.

All the Vietnamese people we met were warm, friendly and healthy looking in every way. They have repaired all the bomb craters, cleared farms and fields of unexploded ordinance, opened small restaurants and stores, many inside their homes, and they seemed genuinely pleased to see us tromping through their back yards, climbing hills, crossing creeks and using modern GPS devices to find, memorialize, tell stories and shed tears at places where many of our fellow Marines were killed and wounded.

Like Bill predicted, a new light was shed on Vietnam, a bright contrast to the dark death, suffering and wars of the past. Most of today’s Vietnamese were not even born in the 60’s and in their history books, the war against “American aggression” was just one of many wars they fought until they finally united their country.

After we returned home, Bill’s wife developed Alzheimer’s. Today he visits her in a care facility.

Bill ended up sending me and e-mail to celebrate the Marine Corps Birthday. The stories he tells are indicative of the type of leadership we value most in the Marine Corps. Here’s why I love these men. I added the BOLD type.

Today, my balls are back to normal and we’re all glad we took that trip.

Hope your 243rd birthday is a good one.

In 1969 the Marine Corps faculty and students at the Army’s Special Warfare School at Ft. Bragg NC put on a Marine Corps Birthday Ball with Dress Blues, a huge birthday cake and a dance. One of my fellow student Lieutenants, Duane Boozier, knew some girls at an all-girls college near Fayetteville and lined up dates for just about everybody. I still have a picture, but can’t remember the girl’s name. She was a good dancer, though, and had a nice laugh. We didn’t speak the same language, as she spoke North Carolina and I spoke North Dakota, but we had a good time, anyway.

In 1970, having survived Vietnam, I celebrated the Marine Corps Birthday at Mt. Fuji, Japan, where the 3rd Battalion. 4th Marines was undergoing cold weather training. The party at Mt. Fuji was quite a bit more rowdy than was the one at Ft. Bragg.

In 1971, I was Officer Of The Day for Headquarters Battalion, Marine Corps Base, Camp Pendleton, CA on November 10.  We had a parade in Dress Blues, swords and the whole nine yards. Pretty impressive to see all of those swords flashing in the sun. I still marvel that no one got stabbed.

That night, I got word that the Military Police were laying for enlisted men coming out of the Enlisted Men’s Club on the inebriated side, so I gave the Camp Guard, which answered to the Officer of the Day, instructions to have their vehicles in the EM Club parking lot to give those young Marines a ride back to their barracks, right past the MP’s, who were pissed.  The next morning, when I turned the log book over to the Battalion Executive Officer, the Commanding Officer of the MP unit at Pendleton was there to chew my ass and protest my order to the Camp Guard.

I told him and the XO that I thought it was more important for officers to take care of their men than to torment them. Besides, I was going to be a civilian in a month, anyway. What were they going to do to me? Shave my head and send me to Vietnam? Been there, done that! The Executive Officer just grinned, said that he didn’t know of any orders that prohibited what I had done, and that he thought the MP’s might have more important things to do than hang around the EM Club parking lot to harass Privates & PFC’s who had been celebrating the Birthday of the Corps.  It was good to know that there were Majors who had balls.

On Thanksgiving weekend, my friend LT Mark Johnson and I went skiing at Mammoth Mountain in northern California. I thought that I knew how to ski, but Mammoth Mountain taught me that thinking you know how to ski and actually knowing how to ski are two different things. After that, it was home for Christmas and 47 years of dull tranquility. But, every November 10th, I recall my brief but spectacular career in the USMC, and some of the finest men it has ever been my privilege to know. That’s probably enough excitement for one lifetime.

Take care, Fred, and enjoy the weekend. No fighting or brawling, just reminiscing about the old days with the brothers from the old Corps. As King Henry V, who might have been a Marine if the Corps had been around in his day, said back in 1415, “…we few, we happy few, we band of brothers…” 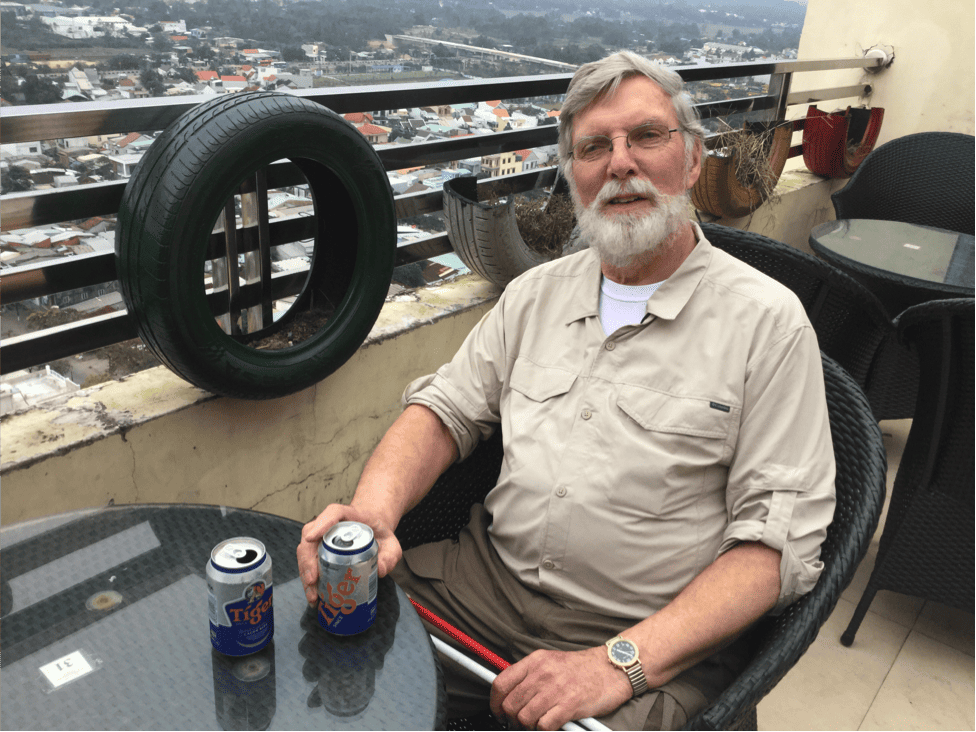 Enjoying a round of Tiger Beer in Vietnam.

A short video of Bill speaking to someone who was there selling soda when he was in Vietnam.